“Although unpredictable large deviations are rare, they can not be dismissed as outliers because, cumulatively, their impact is so dramatic.”  This sentence appears towards the end of The Black Swan by Nassim Nicholas Taleb.  The entire book is dedicated to awakening humankind to the inherent drawbacks of commonly used, standardized predictions of the future.  Our desire for certainty, and our planning for incremental changes and generalities, are meaningless when you look at the events that have actually shaped the course of our history – the so called Black Swan Theory.

A Black Swan in this context is a metaphor for the belief through to the 17th century that all Swans are White.  Observations bore this out until 1697, when Dutch explorers came across Black Swans in Western Australia.   The reference has since come to represent the fragility of systems of thought, when a single such observation can undo all previous logic.

Black Swan events, according to Mr. Taleb, have three primary attributes: They are exceptionally rare, have an extreme impact, and are retrospectively predictable (normalised after-the-fact).   Much of the book is dedicated to stories from his past and various examples to support his reasoning.  He also uses these examples to demonstrate the uselessness of standardised predictions, deviations, bell curve distributions and the like.   The belief in these common tools and methods in creating a more certain future fall apart when faced with Black Swan events, such as 9/11, Brexit, the “Dotcom” crash, the Lehman Brothers bankruptcy that caused the 2008 Global Financial Crisis and so forth. *  (Some have argued COVID-19 belongs in this group, but this is questionable based on the number of pandemics that have occurred in the past.  The concept of “unpredictability” differs greatly from being “unprepared”). 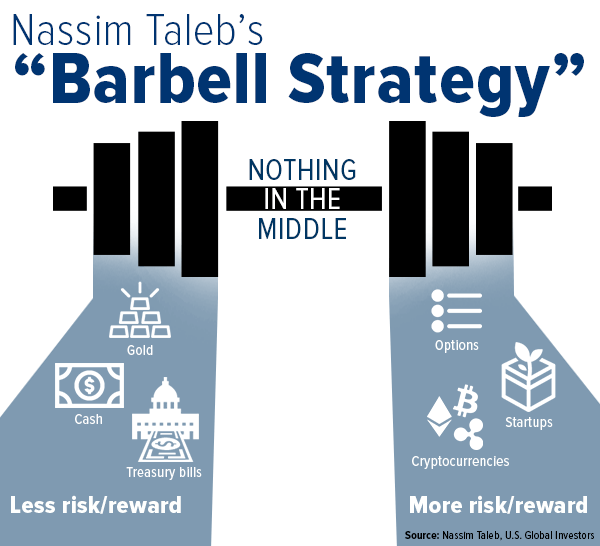 Mr. Taleb’s solution to avoiding these prediction fallacies and all things “average” is what has become known as the Barbell Strategy, particularly amongst investors and stock market traders where Mr. Taleb is still active.  Essentially, one puts a large amount of capital at low risk, while using a small portion to seek out the extremes that might greatly benefit from the unexpected (high risk/high reward).   Universa Investments, a hedge fund Mr. Taleb advises on, is one such strategic example, gaining over 4,000% in Q1, 2020 on the COVID-19 market volatility, while most stocks plunged.

A natural story teller, albeit with a slightly abrasive, disparaging style of writing, Mr. Taleb does unfortunately undermine the book’s message in many readers’ minds. The stories he tells can lead to confusion and fact-checking.  For example, the book opens with the influence of his childhood experiences in Lebanon, from the peaceful, tolerant society he was born into until it all changed with the Civil War in 1975. He describes this change towards the barbaric actions of war as “abrupt” and happening “overnight”.  But a review of Lebanese history is littered with potential conflict throughout the 1940s, 50s and 60ss, which chips away at the strength of his arguments and ideas.  In another section of the book, he unhelpfully creates a fictional character, Yevgenia Krasnova, instead of factual anecdotes, to demonstrate an example of a Black Swan.

Even so, there is enough evidence in this book, as well as his other related efforts, such as “Fooled by Randomness” (2001) and “Antifragile: Things that Gain from Disorder” (2012), to suggest that embracing uncertainty and unpredictability are worthwhile pursuits.

* Events such as the 2008 Global Financial Crisis and Brexit occurred after the publication of the book in 2007, but are used here for emphasis.